DIPPING IN THE RHINE 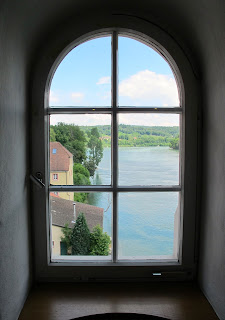 This week I have been speaking at a Fatherheart School at Rheinfelden in Germany. This small town sits on the north bank of the river Rhine opposite the Swiss town of the same name. The School was held in the old castle on the banks of the river called Schloss Beuggen. It is a beautiful old castle that is now used by the Lutheran Church of Germany as a conference centre. Each day we gathered in a room in the old part of the castle for the sessions of the School.  The 14th Century casement windows looked out on three sides down to the dark waters of the Rhine that flowed below.  This section of the river flows fast and deep.

The old gate house of the castle has the date 1543 carved over the door way.  The castle has seen many events over the centuries.  In the 16th Century the area of Rheinfelden was a hotbed of reformation zeal and the new teaching of Martin Luther that it was only possible to know God through a personal relationship with his son Jesus.  They taught that Jesus came into our world because the Father loved us so much and wanted relationship with us. Our broken and sinful natures had made it impossible to know him and we were lost and separated from his love. So Jesus came and opened the way up to know God as Father by dying on the cross and restoring the lost connection between us.

This message was taken up by many people in the area of Rheinfelden in those days.  Large numbers of them wanted to worship God free from the restrains of state churches and the control of religious legalism. They became known as Anabaptists because amongst other things, they rejected infant baptism and taught that faith required a personal response evidenced by baptism as believers. This is when a person by their own choice is baptised in water rather than as a choice of their parents for them as babies. They are plunged or dipped completely into the baptismal waters.

In the horrific wars of religion in the 17th Century hundreds of Anabaptists in the Rheinfelden refused to give up their beliefs and as a result were tortured and executed by drowning in the River Rhine near Schloss Beuggen.  They called it the 'Dippers dipped!'

As the river flowed past the castle where we were holding the Fatherheart School I was conscious that a new reformation is in progress.  This reformation is a fresh realisation of God who wants to draw us all into his inclusive relationship of love that he shares as Father, Son and Spirit and with us a his sons and daughters.

I didn't fancy getting dipped into the Rhine either for my beliefs or for a swim but I am plunging into this wonderful fresh revelation and love swimming totally out of my depth. 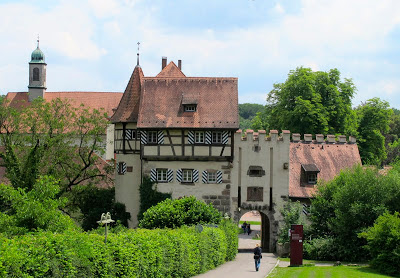 Posted by Trevor and Linda Galpin at 15:34 No comments: