HURRICANE IRMA AND THE JUDGEMENT OF GOD


In the last year we have encountered two hurricanes.   The first was Hurricane Matthew which slammed into South Carolina the day last October before we flew in to Atlanta.  It delayed our arrival by a couple of days and disrupted the event we were due to attend not far from Charleston.

This year was more specific as we landed in Florida for a week of rest and holiday and found ourselves caught up in a mass evacuation of over 6 million people.  We joined the interminable lines of cars heading north and eventually after driving for nearly 18 hours found ourselves in the safety of Orange Beach, Alabama rather than St Petersberg Florida.  We sat on the sidelines of the main event which tore through the Florida Keys, made landfall near where we were meant to be staying and ripped a path up the centre of the state causing billions of dollars worth of damage and flooding many coastal communities. Friends suffered damage to their property and most are still without power.

We met nothing but kindness and help from people all along the way from gas stations to the hotel where we finally ended up. There were many stressed and anxious fellow evacuees staying at the same hotel.  We experienced sympathy, concern and classic southern hospitality which was heart warming.  It confirmed my opinion of America and Americans as being kind, gracious and welcoming if at little parochial at times however as some seemed confused by our accents and why we were there! 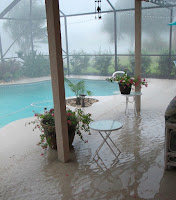 We watched the weather channel as the drama unfolded.  We followed posts on Facebook and read comments by many 'religious' people offering advice and direction on how to pray in these circumstances.  The suggestions varied widely.  Some of the advice was wise and sensible.  Some was down right crazy and driven by fear and appalling judgement.   The tragedy of this is that often these rather extreme views are taken as to be representative of all Christians. This has always been an issue and is not new.  This spate of hurricanes, Harvey which hit Texas less than two weeks ago and now Irma which has devastated Florida were both Category 4.  Hurricane Jose is swirling around close to the Bermuda and can't seem to decide where to go. They have caused some parts of the Christian community to rise up in prayer to "rebuke the storm", send it way, meaning 'as far from me as possible and not in my back yard.'  One of the more extreme views found its way into the Washington Post this week.  "We pray that Irma divert from its path toward Miami, and go back out to sea.  We pray in these storms that you will send the hosts of heaven to shred the demonic fury that is driving the coming together of these winds."

I saw a post not long ago on Facebook which triumphantly proclaimed a tornado had been diverted from its path away from the writer's home because of anointed and powerful prayers.  Then a day or two later the same writer was expressing sympathy for the damage and the destruction in the immediate neighbourhood due to the same tornado that had been "prayed away".

Back to these hurricanes.  I heard of one group who daily stood on a pier at Jacksonville Beach rebuking the storm and sending it out to sea.  It did the opposite sadly and hit the west coast of Florida which sent a huge tidal surge onto the east coast.  I'm sure there was lots of good intention but I imagine there is also a lot of disappointment now as Jacksonville was particularly badly flooded.

Some people are even claiming, “These hurricanes are not the result of global warming; they are the Judgment of God because of the innocent blood crying to Him for vengeance,”  There are numerous other examples that have cropped up this week.  Even in the terminology of some Insurance companies natural disasters are described as Acts of God.

Are natural disasters the judgement of God, or as some have said, a warning from Him to repent, a way of God trying to get out attention? Bolts of lightening are considered in the same way by many not least Martin Luther who over 500 years ago made avow to become a monk after narrowly missing being hit by lightning.  Earthquakes are similarly viewed. The devastating earthquake that struck Haiti a few years ago was widely believed to be God's judgement on the poorest nation on the planet because of their widespread practice of voodoo.

So what do we make of all this?  Is this the Judgement of God on America and Florida or the tiny islands of the Caribbean?  Why them and not North Korea or Walton on Thames?

The root of the confusion comes from a misunderstanding of the nature of God and the nature of the world in which we live. When God is viewed through Adam's fallen eyes, he is then seen as a God who people fear and hide from. He is seen as fickle and impulsive in the way he responds to our fearful prayers. He is cruel and arbitrary in his dealings with people.  Man's fallen view of God creates a caricature of him that is driven by our own brokenness and fear.  We live in a world that has been impacted by our fallenness and experiences countless natural phenomena and disasters daily as a result.  Let us look at lightening for a moment.  In the US there are 25 million cloud-to-ground lightning strikes per year.  1,800 thunderstorms on earth at any given moment, and 100 is the number of times lightning hits earth per second.  Earth is an active place and earthquakes are always happening somewhere.  In fact, the National Earthquake Information Center locates about 12,000-14,000 earthquakes each year! 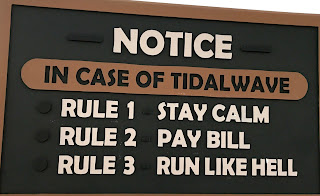 As for hurricanes, typhoons and cyclones on average there are about  70 to 110 named tropical cyclones per year across the world, including about 40 to 60 that reach hurricane strength. This range has held remarkably steady within the last 40 years. This is according to University Corporation for Atmospheric Research.

So how do we respond to these frequently occurring events? It's not inappropriate to pray but praying within the will of God has always been tricky as often it is our will rather than his that we pray for.  When Jesus' disciple's experienced a potentially life threatening storm on lake Galilee interestingly he was asleep peacefully in the bottom of the boat.  Jesus knew that this was not his time and there was no cause for alarm. However in order to calm the disciple's fears he "rebuked the storm." This is where the rebuking thing comes from.  What does this mean and what happened?  He said, "Stop it!" and it did. It stopped, it didn't divert across the other side of the lake and flood Capernaum, it stopped.

The apostle Paul got caught up in a horrific Mediterranean storm with hurricane force winds which lasted for two weeks. Paul was not disobeying God, he was living in the will of God for his life but he got caught up in storm. What did he advise? Take all necessary precautions, dump excess baggage, eat a hearty meal to keep strength up, pray, trust God and run before the storm. Seems like good advice.  Finally the boat ran aground on a beach in Malta and every one got saved.  That is a good outcome.

We face daily the challenges of our world. We read in Romans 8 that all of creation is groaning waiting for the appearing of the sons of God. We experience that groaning in many ways not least in storms, floods, hurricanes and disasters.  As increasingly the sons of God rise up and step into our inheritance we will see the impact in the people of this world who need to know that God is a loving Father who cares for us and longs for us to find our home and true identity in him.

When the storm comes we step up to the challenges as sons and daughters of almighty God our Father and reach out to our fellow man with all the compassion and comfort that we have received from him.

Posted by Trevor and Linda Galpin at 16:33 4 comments: