THE STORY OF PAUL, THE EARLY YEARS. 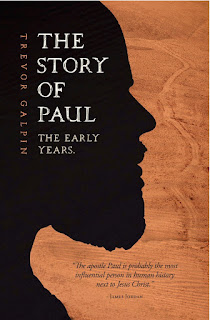 I'm delighted to announce the publication of my latest book,  The Story of Paul, the early years.  It is available on Amazon and Kindle.

But why another book on the apostle Paul? Haven’t there been enough books on him already?

Here is why I wrote the book.

The apostle Paul has been with me all my Christian life. What I mean by that is, my earliest memory of the apostle was being informed by my parents that my middle name was Paul and I was named after him. I had no idea what they were talking about. Much later, I discovered what they meant. They were expressing in some way their hopes for me, that I would be like Paul. Whatever the reason behind it, I have always had some sort of affinity with the apostle. That was about as far as it went for years.

In the 1970s, I studied theology at Spurgeon’s College and whilst Paul was on the curriculum, he was not a major focus for me. In many ways, I felt more akin to the apostle Peter in his ups and downs. Incidentally, my brother had Peter as his middle name. The apostle Peter had an opinion about Paul also, one that I shared. He says of Paul in his second letter.

“... Our dear brother Paul also wrote you with the wisdom that God gave him. He writes the same way in all his letters, speaking in them of these matters. His letters contain some things that are hard to understand...” (2 Peter 3:16).

That just about summed up my opinion of Paul. There was a lot in Paul that was hard to understand. My interests in theological college went into the realm of Church History. Later as a local church pastor, I would preach from Paul’s letters but often majored on what I felt were the practical sections, usually towards the end of each letter, rather than what I thought were the heavy bits.
However, over the last few years, I have personally discovered truth that I had not really seen before in the New Testament. I began to receive revelation that God is a Father who wants us to know and be known intimately by him. This has changed my whole perspective on what it is to be a Christian and a son of God. I have written about that in my first book Falling from grace into Grace and being caught by the Father.


What has also happened as I continue this journey is I have rediscovered Paul the apostle and found that he had an amazing revelation of God in Christ. I keep revisiting the writings of Paul in his letters and discovering things I had never seen before. They are truly a gold mine of truth. This led me to think about how Paul received such incredible revelation and the battles he had to fight to share this truth with us.

In this book about Paul, I imagine how these events unfolded and how he received this revelation.

Inevitably, I cannot write about these things just from a theological point of view. I am not wired like that. I wanted to know what Paul was like. Why he said the things he said. More to the point, I wanted to see how the legalistic Jewish Pharisee who persecuted the early church was transformed into the man who had a profound revelation of the love of God the Father expressed in and through Jesus Christ his beloved Son. I want to tell his story as it appears in the pages of the New Testament. I want also to get behind the words and meet the man.

Our primary source of information about Paul comes from the account written in the New Testament by Luke in the work known as the Acts of the Apostles. There are also bits and pieces of biographical information scattered through the thirteen letters attributed to Paul, and my fertile imagination has pieced the story together from these sources. 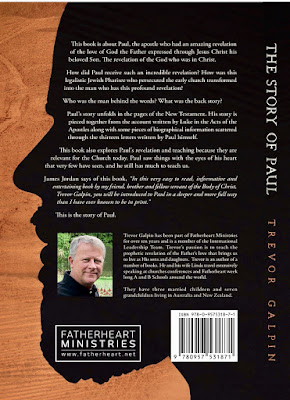 What conversations went on? What was the back story? Who were the people Paul worked with and knew? Though the book is not a novel, from time to time it has been necessary to conjecture a little about how the various events were linked. Therefore, in writing this non fiction work, I closely follow the events as they unfold in the New Testament and here and there, I imagine what people were thinking and saying weaving a historical narrative into the text. I think it will be self-evident when that happens. I also wanted to explore Paul’s revelation and teaching as these have deeply impacted me, and I believe they are a word for the whole Church today.

I believe Paul saw things with the eyes of his heart that very few have seen, and he has much to teach us. I'm thrilled that James Jordan wrote the foreword too. Thank you James.

Finally I also believe it is a jolly cracking story to tell!
Posted by Trevor and Linda Galpin at 12:45 1 comment: