The Big Picture Finding the Father in the Bible.

Here is what has kept us busy in this Covid season....

Finding the Father in the Bible. 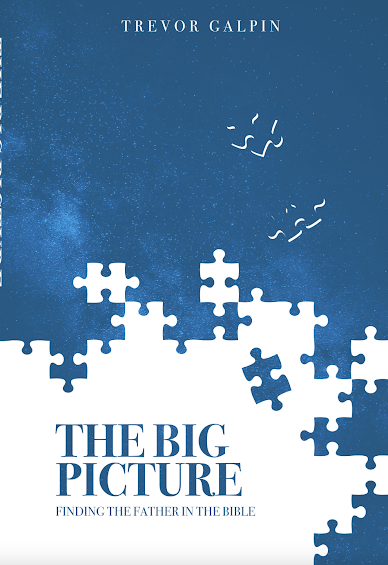 The Big Picture takes a look at the great story of God in the Bible from Genesis to Revelation. It charts how God is eternally Father since before creation and how he reveals himself as Father through all scripture. It draws together all the various parts of this glorious biblical truth, like pieces of a jigsaw, that come together into one vast glorious narrative of the love of the Father for his lost children. It focuses on The Father’s love and the sending of his Son Jesus who brings us home. It explores how this truth is inspired by the Holy Spirit in the pages of the Bible.  Stephen Hill in his foreword says of “The Big Picture”, “I believe that this book is an important part of what Paul the apostle called “The whole counsel of God.” It is a resource for now and for the future and many treasures are contained therein.”

If you would like to order this or any of my other books here is the link to Amazon. If you enjoy this or any other of my books a review on Amazon would be great too!

SPECIAL OFFER.  If you want to buy more than one of my books, that is 2 or more please contact me directly and I will arrange for the books to be sent to your home address, it's cheaper all round. So email me at tlgminsus@gmail.com  and let me know what you would like. We can talk about it and then I'll price them and let you know how much they will cost, based on where you live and we will take it from there. If you want to sell any of my books, we can talk about that too and come to some sort of arrangement so it works well for us and you.

Here is what I wrote in the introduction of the book and why I wrote it.

"Over the last few years, I have had the privilege to teach at a number of week-long Schools as part of Fatherheart Ministries (FHM). These Schools known as A Schools are followed by B Schools sometime later. They are opportunities for people to sit under prophetic teaching and have an experience of being loved by God as their Father.

My wife Linda and I had the opportunity of attending both of these events in 2007 while we were living in New Zealand. These Schools were led by James and Denise Jordan, the founders of Fatherheart Ministries. It is not an exaggeration to say these were life changing weeks for us both. I have written about my personal experience at the A School in my book Falling from grace and being caught by the Father (2013). In 2008, we became associated more closely with FHM, joining the team with the Jordans. Over the next few years, we transitioned from being team to speakers to finally being released to lead and teach the A Schools and then to speak alongside James at B Schools and then to lead and teach B Schools on behalf of FHM.

Throughout these years I have had a growing understanding in my heart of the nature of God as Father, his Son Jesus and the work of the Holy Spirit. I studied in the 1970’s for a degree in Theology in the UK and have loved studying and exploring the Scriptures. I began to see in many ways I had very much missed the point about what God was doing and revealing through his Word, the Bible. I was a product of my background as a Baptist and charismatic. As time went by, I wrote and dug deeper into the scriptures. I wanted to see how the revelation of God as the Father was revealed through the life and ministry of Jesus. My next book Jesus and his Father (2014) emerged out of this exploration. Then came a look at the story of the Church throughout history and how we had seemingly lost touch with this truth. I had taught a number of times on Church History and so the book appeared Finding the Father in the story of the Church (2016).

I found Father was opening the eyes of my heart to new and exciting revelation in the scriptures and had the privilege of teaching these truths. By 2018, God had taken me to look at the Apostle Paul and how he had a revelation of the Fatherhood of God leading us back into our true identity as sons. It was exciting and challenging as my theology was being turned upside down or rather as I was once told by a group of pastors in Africa, it was being turned the right way up. One of them said it was as if he had been struggling all his life to walk on his hands and failing continually then he discovered he had feet. Like so many, I too had found my feet, took tentative steps and began to walk and run and jump for joy. So, the next book, The Story of Paul – the Early Years (2018) came out followed by the second part, The Story of Paul, the middle years (2020).

Revelation is an uncovering of truth that has always been true. We just had not seen it. Our eyes were closed and only when God the Father gives us the gift of revelation can we see. In this season I drank deeply of the flow of revelation coming through James and Denise Jordan’s ministry. Their teaching on the nature of the two trees in the Garden of Eden, and the eyes of our hearts being opened was profound. I was encouraged by them to teach what I had seen, and I had the joy of doing this on a number of B Schools.

As I taught and reflected, I began to see how all the teachings being taught in A and B Schools were linked. They were not just stand-alone teachings. They were all parts of a greater whole. I describe the process like doing a jigsaw puzzle. Like many, I have rediscovered jigsaw puzzles during the COVID pandemic while locked down and at home. When doing a puzzle, we usually look for all the edge pieces first and join them. Then we move on to the coloured sections. Often, they sit there, not joined, floating. Then little by little pieces are found to link them to each other. Finally, as the last piece is found we stand back and look at the big picture with great satisfaction. Out of this came this book, The Big Picture finding the Father in the Bible. I am not claiming that I have found all the pieces, but I do feel there is a coming together of many of these great truths God is graciously showing us in these days. I feel too, our theology is continuing to be transformed and is becoming full of life and light. Theology used to bore me but now as truth leaps out of the Word, it thrills me beyond what I could ever have imagined. I hope I can share this joy and thrill with you as you read.

I remember the words of John Robinson in 1630, who encouraged the Pilgrim Fathers as they crossed the Atlantic to the New World: “The Lord has yet more light and truth to break forth from his word.”

Posted by Trevor and Linda Galpin at 06:25 No comments: