THE STORY OF PAUL II, THE MDDLE YEARS NOW PUBLISHED

I'm delighted that my latest book 'The Story of Paul II, the Middle Years' is now available.

It can be purchased on Amazon at this link amazon.com/author/trevorgalpin

It is also on Kindle and in Book Depository. 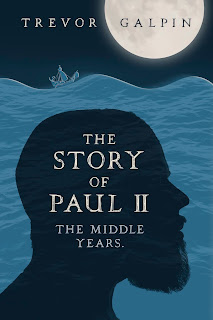 After completing my last book The Story of Paul: The Early Years, I was asked if another one would follow it? The first book on Paul was about Paul’s life leading up to the time he wrote the letter to the Galatians. It was primarily a study of his teaching in this letter. It gave a lot of context and background leading up to Paul’s great exposition of what it is to be ‘In Christ’ and how we are re-positioned in our real identity as sons of God. However, I put all of this in the context of a story.

I believe Paul wrote Galatians after the Council of Jerusalem recorded in Acts 15 and before he began his second of three missionary journeys in Acts 16. Consequently, the first book dealt with Paul’s youth and upbringing in Tarsus and in Jerusalem when he was known as Saul. It then moved on through his years as a Pharisee, persecutor of the Followers of the Way and his conversion on the road to Damascus. It progressed with him in the silent years in Arabia and in Tarsus before Barnabas asked him to join him in Antioch. Then it covered the first missionary journey to Cyprus and the mainland into southern Galatia before returning to Antioch. It followed in detail the conflict that emerged among the believers about whether Gentiles needed to practice Jewish customs to be Christians. Finally, my book explored Paul’s writing of Galatians and the great truth revealed to us within it.

Each chapter in The Story of Paul began with a semi fictional section which was intended to describe the events leading up to what was about to happen and the discussion that followed. I wondered what may have been going through Paul’s mind and the people he encountered on the way. This section in each chapter prepared the way for what I believed was the more important part of the book.

I love stories and am passionately interested in the people mentioned in the New Testament who make up the cast of the great story of God reconciling us to himself through his Son Jesus. I find myself asking questions such as, what were they thinking about, how did they feel, what was the weather like, who else was there, what did they say before and after? I tried to imagine what the backstory was. It was this semi fictional part of the book which created the most interest and comment, not the theological part!

Friends started to ask me when I was going to write the next part of the story. I dismissed this thought on the basis I did not have the time to do it. However, early in 2020, I woke up one day thinking about a sequel. I looked at various possibilities which I discarded. The obvious thing to do was to continue the story. I read the passages in Luke’s account in Acts. I also looked at Paul’s own comments about his journeys in his letters. I quickly concluded that Luke did not give us the whole story. He of course was writing for a purpose and did not always need to include everything that happened. However, for me the questions started to come again, the when, why, who, how and what that make up the story of The Story of Paul Part 2. In the first two months of 2020, I had a few paltry attempts to get something down. I did not get very far. Then I had a thought to write the story as I imagined it unfolding. To forget the theology and go for the story, not a biography, others far more competent and eminent than I have done this to great effect, but a story.

My other procrastination was I did not have time to write. Well, all of that changed at the beginning of March when COVID-19 confined us all in our houses and I found I have masses of time on my hands.

So that is what this is. It is a historical and biographical story. It is therefore part fiction, but a fiction based on true events involving real people encountered in the New Testament, in the Acts of the Apostles and in the Letters of Paul the apostle. The main characters in the story we know a lot about, people like Paul, Timothy, Aquila, Priscilla, and Silas. Many of the minor characters who appear in the story we know very little about at all. This is where my imagination comes into play. Some of the characters are historical characters mentioned in the Roman writers Tacitus and Suetonius. A few are fictitious. One key character is completely fictitious, but he represents someone or a group of people that dogged Paul’s footsteps throughout his journeys. You will meet him on and off throughout the narrative. I have called him Matthias.

This is a story, hopefully a gripping one inspired by true events. As in all historical narratives, it contains much truth and will hopefully have thought provoking moments which will stir you, the reader, to dig deeper into the source material in the New Testament. It is a story about one of my favourite biblical characters, the Apostle Paul and how he brought amazing revelation to us.