The Snows of Kilimanjaro...well, almost.

Africa continues to fascinate and challenge me.  Three weeks, three East African countries, all so different.  We were in Uganda for the first week at Jinja overlooking the river Nile teaching an Fatherheart A School. Then a week later we were in Tanzania to teach another Fatherheart school about the love of the Father. In between was an overland  road trip across Kenya that took 5 days. Five of us in a Landrover. Ingrid, Winette, Mark and us two. The Swahili word for a journey is safari!!  Well our safari took in the Kenyan Highlands where they grow tea; we stood astride the Equator; the urban sprawl of chaotic Nairobi; the vast plains of the Great African Rift Valley, Masai land and the legendary Masai Mara, then on into Tanzania. 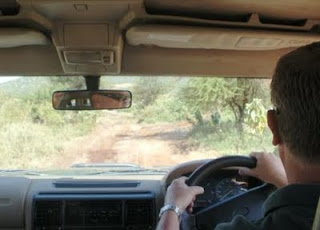 We encountered one of the worst roads I have ever driven on in my life.  The five of us bounced along and around huge pot holes along the main tourist road to the game parks. There were real zebra crossings which helped to ease the pain of the drive but we ended up taking much longer and drove the last 3 hours in the dark on dirt roads to get to the tented camp on the edge of the Mara.  It was worth it in the end but at the time it was pretty hairy. 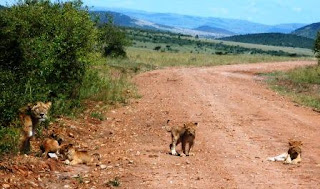 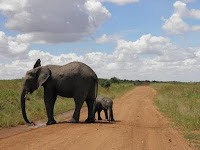 The day in the Masai Mara game reserve was fantastic. lion, buffalo, giraffe, hyena, jackals, hippos etc etc. Can't describe it. the birds were incredible.  The next day we drove on via Nairobi where we got held up in a Kenyan traffic jam of epic proportions that beggars belief.  Every man for himself, lorries trying to cut across the central reservation getting stuck in the mud and even one turning over. Cars driving the wrong way back up the road. Total chaos. Next day we were heading towards the Tanzanian border, when we hit a road blocked by Masai tribesmen armed with guns and spears, protesting that bandits had come in the night, killed a watch man and stolen their cattle.  It was very threatening so we withdrew and waited 24 hours while it was sorted out.  Next day we caught a glimpse of the snows on the top of Kilimanjaro and eventually got to Lake Manyara where the next Fatherheart School was to be held.

The Schools were very good. Our African friends said things like, "This is the only hope for Africa." "This is what I have been looking for all my life."  "My life is now turned the right way up."  Linda taught on the nurturing heart of God, reflecting the mother like aspects of God's love for us.  Mark taught on weakness as the key to knowing the power that the sons of God have. Winette shared on forgiving from the heart and Ingrid explained the way we behave like orphans when we do not know God as Father.  We covered all the core topics of the Fatherheart School and had an amazing time.

I have a little of Africa in my blood from when I was a boy in Swaziland so long ago. It is very humbling to see how God has this door open to us.
We know we will be going back.  The safari we are on with our Father has only just begun!
Posted by Trevor and Linda Galpin at 11:42