Flags and the Rugby World Cup

New Zealand is hosting the Rugby World Cup at the moment. This means the country is in fever pitch and flags are everywhere. Taupo is hosting three teams the Springboks, S Africa's team for the uninitiated, Wales and Ireland. Having a coffee down by the lake we were joined by several Springbok team players the other day. Not that I knew who they where to be honest, they just showed up and fans were snapping photos of them.  We even sat on a plane once with the All Blacks (NZ's fabled team again for the uninitiated.), but it was half through the flight before I realised who they were.  However I digress.  It's the flags that I have noticed.  Everywhere you can see the flags of the various nations being displayed. It has meaning for people. Flags tell you something. 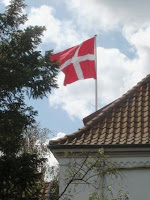 Earlier this year we were in Scandinavia and noticed the flags there too. In Norway at Pentecost, Olav raised a huge Norwegian Flag to celebrate the day. It seemed fitting that the wind of the Spirit was caught symbolically by the flag.  Then in Denmark we celebrated our 37th wedding anniversary and Hans and Bodil raised a huge Danish flag up their 14 metre high pole in our honour. That was very touching.

Malta was covered in flags. Each village displaying a flag of its patron saint. They get the prize for the biggest flags, some the size of tennis courts. Amazing greens, reds and blues. It brightened up the uniformly sandstone colour of a hot and dusty island.  When we arrived in Northern Island it was the Marching Season when again the flags were everywhere. Red white and blue Union Jacks, Orange Order flags, lodge flags. These flags proudly displayed one section of the communities allegiance to the UK. To the other section it seemed to be a provocation and reminder of deep sectarian differences.  Flags mean something. They send a message to those who have eyes to see the meaning.

I've not always seen this before or rather read the message. We have a good friend in Dorset who gets this very clearly. She has made scores of silk, painted banners over the years. She listens to what God is saying to her and paints accordingly. Her banners have gone all over the world now. She believes that by waving them in various locations it sends a message to the unseen spiritual realm. Like all symbols it has meaning.  Pauline's banners have made it to New Zealand. A little church in Pauanui displays and regularly proclaims the presence of God's love and fire by waving a silk fire and river flag, symbolic of the fire of the Holy Spirit and the river of the Spirit that flows from the throne of God. I've seen people fall on the floor under the anointing of the power of God when these flags are waved.  We gave another of Pauline's banners to a group of intercessors in Uganda. Who knows what power this symbol will impart to their prayers and to that nation. 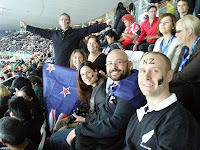 In a few weeks at the final of the Rugby world cup the Eden Park Stadium in Auckland will be full of flags and banners. This bunch of All Black supporters are all expat Brits including Simon (standing) and our daughter Sanna. My guess is there will be an awful lot of black in the crowd.  Go the All Blacks.  There I've said it, I'm turning into a Kiwi, a New Zealander for the uninitiated.