One of the mixed blessings of getting older is that there are fewer things left to do!  One of my things was to see the Pyramids. That has been now ticked off the list of things to do before I die. But I have added a caveat to this accomplishment. See them properly next time and not from the roof of a rather persistent local's house who really would rather we had paid a lot more money to him and he could then have taken us into the enclosed area at a special rate.... just for you... very cheap...etc etc. Instead we climbed the steps to the third floor roof and had an amazing view across the roof tops of the rambling suburb that is right up against the tourist zone that is the Pyramids and the guarding Sphinx.

A 16 hours stopover on the way back from Tanzania to the UK meant this whistle stop visit to these ancient tombs of the Pharaohs was possible.  We got a taxi from the airport hotel and off we went. Very clear instructions of what we wanted were totally ignored by the driver who preferred to drive through the city centre. Cairo has now topped 25 million people. So the crush of cars, trucks, buses, motorbikes, donkey carts and camels has contributed to traffic chaos, exhaust pollution, dust and noise. Every vehicle driver has one hand on the wheel and the other on the horn. The latter is the most employed device. Where roads had two lanes, four vehicles jostled abreast for space, each trying to get an edge ahead of the one behind. The windows are open just in case there was a need to shriek some expletive in Arabic at the one who wins.

We crossed the Nile.  Earlier this year we stood on the banks of the Nile in Uganda at the retreat centre of Mto-Moyoni where we had taught a Fatherheart School in May. This is perhaps 1000 miles or more to the south at the source of the Nile as it flows out of Lake Victoria. Mto-Moyoni means a "river in the heart" and is run by our dear friends Ingrid and Winette. Their desire is that the love of God the Father would flow all through Africa and out into the sea in Egypt. As we looked at the frenetic life on the streets of Cairo I wondered how that would ever become a reality. 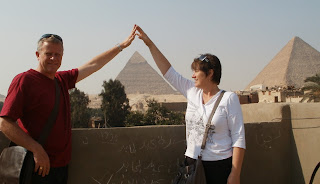 Our taxi driver stopped at a authentic "Papyrus Museum".  Free admission, very nice, very good, very clean, very cheap... this last one was the clue. I think it belonged to his cousin who wanted to show us how amazing the production of papyrus is etc. It was. It is. And do you know we could have bought a papyrus picture with our names written in hieroglyphics on it etc. We quickly got the idea. The freely proffered tea was a real sweetener, in every sense.  The taxi driver had lots of cousins in seems all in the tourist industry, all very willing to help us experience the delights of Cairo, all very clean, all very cheap. At the papyrus shop.. opps I mean museum I was shown an Islamic picture which had the 99 beautiful names of Allah inscribed on it. I asked if one of them was Abba.  He said  "No, Allah has no relatives and no sons so how can he be Father?"  I wondered if they know that "Isa - the second prophet after Mohammed" called him Abba all the time and came to reveal him as Abba.  It seemed to me for the river to run through the heart they need to know Abba.
Posted by Trevor and Linda Galpin at 14:04