BEN AND JERRY'S, A VON TRAPP AND A REAL HUNGER AT HUNGER MOUNTAIN CHRISTIAN ASSEMBLY 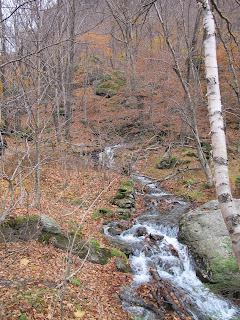 Vermont is full of surprises. This was our first visit to the state. It turned out to be too brief and we are looking forward to going back again next year.  We had been there a week for a Fatherheart School and each day brought new surprises.  First there were the autumn colours disappearing fast as the week progressed and as the wind blew them away. We did get to drive up to the hills on the first Sunday afternoon for a tantalising glimpse of the beautiful surroundings.  Then there were the many tourist attractions that were on offer which will have to wait for next time. Ben and Jerry's Ice cream was founded and created just down the road from where we were staying. Alas we didn't get to take the tour and the obligatory tasting that is involved.

There was also the famous Cabot cheese factory and store, Green Mountain Coffee, maple syrup, cider apple donuts, the list goes on and on.  This is the perfect place for a foodie like me. We visited the von Trapp family lodge, the home of the Sound of Music von Trapps who fled to Vermont at the beginning of the war.  So much to see, too little time.

The reason we were in Vermont was to lead a week long encounter called a Fatherheart School. This was hosted by Hunger Mountain Christian Assembly. An interesting name for a church.  We have been involved in twelve of these school this year and this was the last of the year for us. The purpose of these schools is to teach and encourage people to have a personal experience of God as a Father loving them.  This is not as a one off thing but a life long relationship.  Many are on this journey already but some do not know God as a Father for many reasons. Sometimes it is because of hard experiences they have had in their lives especially if their relationship with their own father has been difficult. These are issues that are raised and looked at during the week.  Many people report that these have been times of incredible healing personally and in their family relationships.  They are often described as life changing.  The places where we will be leading these schools next year can be found on our Comings and Goings page at the top.

This week was no exception. It was accompanied by lots of laughter and joy when people start to discover the freedom they have as being God's sons and daughters.  In the middle of the week there was an open night when many came to get a taste of the schools. Among these was an elderly member of the von Trapp family. She seemed to enjoy the sound of the music too.
Posted by Trevor and Linda Galpin at 11:29 No comments: 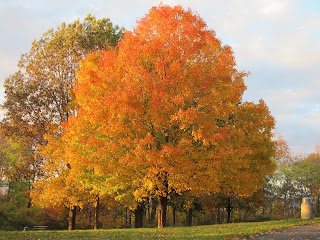 I was not expecting the drive to State College from Newark, New Jersey to be so memorable. It was in fact spectacular.  The Fall colours which are legendary, were in just about the height of their glory. I was completely taken by surprise. I have seen autumn colours in the UK and New Zealand and they are very beautiful.  However this was something else.  It was mile after mile of fabulous breath taking magnificence.

Hyperbole is inadequate here.  For mile after mile every hillside, valley and river bank, was covered in masses of colour. Each turn of the road revealed another amazing view of golden tones and hues.  There were almost every variation of the pallet from yellow to purple, there were golds and russets, reds and browns and colours I have no name for. The colours demanded description but they also defied it. Each tree, normally subsumed and lost in the vastness of wilderness and forest, seemed to be displaying itself individually in its final shout of joy before withdrawing into its winter rest. Each one was distinct in colour or shape.  I felt that each one was displaying the glory of its creator.  Red shouldered hawks flew overhead and an occasional groundhog appeared to survey the passing traffic. 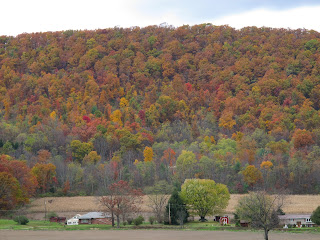 It was truly awesome.  I use that world deliberately. As I drove each turn of the road invited another gasp of beauty.  Beauty is something that our hearts crave and rejoice in when we encounter it particularly in nature.  It was indeed awesome.  Awesome is an adjective that should be reserved for God since he alone is awesome. It means something that calls forth awe and wonder, that stops us in our tracks and causes us to contemplate the absolute incomparable greatness of our God in whose presence we feel so small and insignificant.  The awesome presence of God filled my heart as I encountered the beauty of the scenery along the road. Beauty points our hearts to the Father if we let it.  We have a choice when confronted by awesome beauty. We can photograph it, celebrate it and move on or we can try to capture it, savour it and celebrate beauty’s origin which comes from the master craftsman of the universe God our Father.  He seems to delight in the delight that beauty brings to us.  I felt so loved by him as I drove.  I put a favourite CD on and turned up the volume and sang at the top of my voice.  It was such a great drive!
Posted by Trevor and Linda Galpin at 22:01 1 comment: 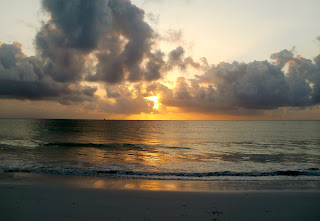 One of the signs of getting older is shorter nights I've decided.  I find I am increasingly waking up earlier in the mornings such as today, 5.30 am and I'm up. Ive been on Facebook, answered overnight emails and now I'm writing a post on the blog.  Added to that it's my birthday and its a big one!  I should be really laying in bed and just enjoying.  But I'm actually enjoying being up.  I like the quiet of the early morning.  I occasionally get to see a lovely sunrise as a result.   This one was taken in August from the beach in Zanzibar where we were having a a couple of days break before starting a Fatherheart A School on the main land in Tanzania.   These early mornings are so often times of reflection for me. I know that doesn't work for everyone but they do for me!

I'm finding that there is great benefit in just sitting and being. After I've done the emails and things and made a cup of tea, there is time in the early morning to sit with my Father.  We don't often say much to each other.  We are just aware that we are together.  I am conscious of his presence. The peace that comes from knowing he loves me and delights in me simply because I am his son is wonderful.  I don't have to do anything to make him love me. This morning the words of a song that comes straight from his heart are flooding my mind.  "Quit trying to please me. Stop beating yourself up. My heart is full of love for you.......then it talks about living in the unforced rhythms of grace. It's by Godfrey Birtill.   It is not that I want to be on my own or I'm tired of people it is more about sitting and resting, gazing, reflecting and wondering at the beauty of the world, the greatness of God, his unwavering love for us and the sheer joy of being in his presence. This is no great surprise nor is it a great new discovery. People have known this for centuries.  However I'm really only just learning it after 60 years!  Better late than never.

Here is the link to the song if you want to listen to it.

http://youtu.be/e9uLzN1elks
Posted by Trevor and Linda Galpin at 07:55 No comments: