THE AMISH AND LIVING IN THE PAST

There is something romantic about the thought of living a simpler life.   For the last week we have been in Pennsylvania.  This American state has one of the largest Amish communities in it. The Amish are the decendants of some of the most radical reformers of the Sixteenth century, the Anabaptists. These groups were on the cutting edge of what God was doing back then. They refused to settle for the status quo, to be subjected to the restrictions imposed by the State churches of Europe.  Large numbers fled to the USA in search of a place to practice their faith in freedom and without state interference.  Now there are many Amish communities across the States.  Their radical cutting edge beginnings have locked them in a time warp of the past rather than in the 21st century. 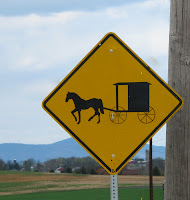 Today they are living in the past and resisting change and fighting to keep the modern world at a distance.  This expresses itself by dressing in an old fashioned way, refusing modern conveyances such as motorised transport and resisting the introduction of electricity.  They have become a distinct group of people who are considered a tourist attraction. They can be seen on the country roads of Pennsylvania riding their horse drawn buggies, working their farms and fields with horse drawn ploughs and carts.  This is very romantic and picturesque.

However, their desire to be separate and to keep apart from the contamination of the modern world comes at a price.  Amish young people who want to move on from this traditionalism find themselves shunned by their families and neighbours. This is all couched in religious terminology and seems very distant from the zeal and radicalism of their beginnings. They often quote 2 Corinthians 6 verse  17 "... come out from them and be separate" to justify this behaviour.

This is a common issue for all Christians.  A longing for the so called good old days.  Christianity is populated by Amish like groups who having discovered something radical and cutting edge in the past have institutionalised it and preserved it. We call them denominations!  They don't drive horse drawn buggies but to some level they live in the revelation of what God was doing in the past.


We settle because the familiarity of the past feels comfortable.  We settle into our comfort zones and struggle when God starts to do something new and fresh in each generation. Today we are being challenged and called to start living in the Father's comfort zone which is the new; the now of  his presence, where we are the object and focus of his love. Surprisingly this can be threatening and fearful if we do not know him as Father or are living in the past of what was before.  His heart is for us to embrace the new thing that he is doing.  The passage in 2 Corinthians 6 in context is about the God the Father living and walking among us. He says he will be our God, our Father, and we will be his people.  Coming out and being separate is more about leaving behind the past and embracing the new thing that he is doing.  Paul goes on to say, "I will be a Father to you and you will be my sons and daughters."  This is a gracious invitation to live in his comfort zone of the present and not the past.
Posted by Trevor and Linda Galpin at 17:41